Sunscreen Camp 2016
In the ninth year of the Sunscreen Film Camp, we are injecting some exciting new features.
The camp will add an optional week, growing from a two-week camp to three.
Many campers and parents have indicated that they would appreciate more time for making movies at camp. In addition, many have requested more in-depth training in the various skills that are required to make good movies.
Nuts and bolts, including how much.
Week One
Acting with Eugenie Bondurant
Goal: to give actors more tools to produce realistic, yet evocative performances on film. Campers will practice focus and concentration. They will read scenes from screenwriting campers and take direction from teachers and student directors. They will practice scenes with active cameras placed in common positions and review performances.
Directing with Curtis Graham
Campers studying film direction will get detailed instruction on how directors manage a project and work with others. More specifically, they will get practice working with two of film’s most important creative personnel: actors and writers.
Curtis will also coach the young directors in the basic skills of managing the production of a movie. These include planning, scheduling, budgeting, editing and his specialty, cinematography.
Screenwriting with Tom Flynn
Writers will get a solid grounding in story-telling and story-form and get lots of practice writing scenes. They will have the opportunity to have their work read by actors and critiqued by the teacher as well as the actors and director.
These students will be responsible for writing the scripts that all the campers will produce.

The Faculty
Eugenie Bondurant
Teaches Acting
Actor, model and acting teacher Eugenie Bondurant lives in St. Petersburg. She is married to Paul Wilborn, the executive director of the Palladium Theater.
She recently played the role of Tigris in The Hunger Games: Mockingjay – Part 2 .
She is on the faculty of the Patel Institute in Tampa where she teaches acting.
Bondurant got into acting when she started taking classes in Los Angeles while on a modeling job, joined SAG (Screen Actors Guild) and started getting small roles in TV shows, commercials and film.
She is a cabaret singer, appearing in the American Songbook Series with husband Paul Wilborn and Blue Roses, and a founder of The Radio Theater Project.
Eugenie is well-known as an On-Camera and Meisner acting coach.

Van Flesher
Camp Director
Portrait Van FlesherVan Flesher studied film at the Asolo Theatre in Sarasota, receiving his MFA from the Florida State University Graduate Conservatory of Radio, Television and Motion Picture Arts. He relocated to Los Angeles two days after graduation.
Each return to the Sunshine State has been a sort of homecoming.
Originally from West Virginia, Van shot his first feature film there and he aspires to produce several more local projects in the Mountain State. Local filmmaking is true independent filmmaking; this philosophy guides much of Van’s teaching.
Van saw his first movie (King Kong versus Godzilla) at a drive in in 1968. The family viewing experience has been important to him ever since. It is an encouraging trend that filmmakers now begin their productivity earlier in life, often while they are still in the contexts of family, school, and neighborhood; perhaps American cinema is evolving toward portraying immediate experience, away from imitative movies about movies.
Before his formal study of film, Van received degrees in English and Writing from Marshall University. He taught Freshman English classes there as a graduate student. He returned to West Virginia as film festival guest artist and as judge of the West Virginia Film Festival’s Student Filmmaker competition.
Van taught several iterations of the Pre-College, Four-Week Film School at the Maine Photographic Workshops (now the Maine Media Workshops and College) in Rockport, Maine.
Other academic appointments for Van have included the Los Angeles Film School, the University of Southern California, the Watkins College of Art Design & Film, Liberty University, and Lipscomb University.

Tom Flynn
Teaches Screenwriting
Tom Flynn started writing professionally in 1987, and sold his first spec script in 1989 to Paramount Pictures and producers Don Simpson and Jerry Bruckheimer. He followed this with sales to Warner Brothers and Scott Rudin, then Simpson Bruckheimer a second time. Over the course of the next twenty years, Tom wrote numerous feature comedies, of which only one, the ironically titled WATCH IT, was ever produced. Still, for someone who wrote almost exclusively original material, the wild spec script market of the 90’s made for a pretty good living. “I sold seven original spec screenplays, yet my mom thought I was a drug dealer because I had all this money, but no evidence of employment on screen or television. I rarely told anyone I was a screenwriter, because the inevitable follow up was, ‘Oh, have you written anything I would know?’”
As the housing bubble was bursting, Tom and his wife, Andi, cashed in and moved to St Petersburg, Florida, “for the climate.”
“I basically quit the business. I bought real estate properties at the bottom of the market and fixed them up. It was fun. I was able to see some results from my efforts, and my mom stopped accusing me of selling heroin.
Still, I had an idea for a drama that I couldn’t get out of my head. I’d never written a drama, not one. After a year of threatening to write it, my wife, who nags me exclusively in cartoon voices, told me to go away for a month and write it, or I’d have a Le Crueset migraine in my future.”
GIFTED was written over five weeks in October, 2011. Tom Flynn no longer dabbles in real estate, he’s a screenwriter. He lives in St Petersburg, Florida, with his wonderful wife, Andi, and four cats, one of which, Fred, has only one eye. His mother keeps the number of the Federal Drug Task Force on her speed dial, just in case.

Curtis Graham
Teaches Directing and Cinematography
Curtis Graham is an Award-Winning Feature Film Director and Cinematographer. His Film Oloibiri recently won the Nigerian Academy Award for Best Film. With 100s of commercials for advertising clients around the world, Curtis Graham has created a diverse body of work as Director/Cinematographer.
Raised in a photographic family, Curtis started taking pictures at age 15. He attended Los Angeles Art Center College of Design, which started a career in Advertising Photography. He has won many accolades for his work in advertising including: N.Y. Art Director, Norma, National Addys, and Clio Award, and his work has appeared in many national publications such as: Town & Country, Esquire, Print, and Communication Arts. His career in Advertising led to doing commercials for his Clients as a Director/Cameraman.
Curtis went on to Attend The American Film Institute. At AFI Curtis received the Mary Pickford Award Scholarship. His Master Thesis film the “The Blue Men” starring Estelle Parsons went on to receive a Student Emmy and Academy Award. It is listed as one of the most award winning shorts of 1990. Curtis also received the Focus Award for Cinematography for “The Blue Men”. This allowed Curtis to pursue narrative work as Director/Director of Photography.
Curtis is a former professor at UT and SE Universities.

Weeks Two and Three – Making Movies
Campers will work to produce the scripts developed during Week One.
Weeks Two and Three will follow the same path as the two-week session of the past eight years, but the campers will be armed with a week of skill preparation.
For nearly four days, campers will get a good overview of cinematography with industry experts using the same equipment the campers will be using. These experts will demonstrate shots and camera angles along with sound and lighting principles essential for good filmmaking.
In addition campers will learn the basics of scheduling, locating and casting. The camp will then divide into production teams and shoot movies. They will have four days to shoot their movies and another three to edit, add music and credits.
The completed films will be shown at a Sunscreen Film Camp Festival on the last day of camp, July 29th.
In addition the movies produced at camp will be shown at the Sunscreen Film Festival in 2017.

In a Nutshell
When?
July 11-29th
Where?
The camp will be held at Studio620 in downtown St. Petersburg, 620 1st Ave. South St. Petersburg, FL 33701
Who is eligible to participate?
Kids ages 12-18. Some exceptions to age requirements will be made based on prior experience and interest level after an evaluation by the Sunscreen Film Festival staff. Please note: movie making is a collaborative effort in which each member of the production team relies on everyone else. Your child’s camping decision should be grounded in a genuine desire to learn the art movie-making.
How much?
Week One: $225.00.
Weeks Two and Three: $525.00
Attend all three weeks: $725.00
The camp day is from 9 A.M. to 5 PM.
What equipment is required?
If you have family equipment, like a camcorder, and want to learn to use it more effectively, you are encouraged to bring it. Otherwise, Sunscreen will provide the equipment.

The Program Synopsis
The program was designed by Film Professor Dave Deborde and Festival Founder and Film Professor Tony Armer.
Week One will be taught by acting instructor Eugenie Bondurant, directing instructor, Dave DeBorde and screenwriting instructor, Tom Flynn.
Weeks Two and Three will be directed by Mr. DeBorde, assisted by two college-age proctors who are experienced movie makers. In addition, guest speakers, like professional cinematographers and editors will also contribute.

What about lunch and snacks?
Campers are required to provide their own meals and snacks. Studio620 is in downtown St. Petersburg where lots of restaurants are within walking distance.
Details
Teams of participants will script, scout locations, shoot and edit as many as five films. They will present at their own festival at the end of the camp.
Questions?
Email Harry Chittenden at [email protected] or call him at 727-420-0566 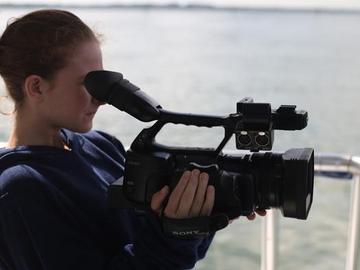